Christmas is officially a month away, which means my holiday baking starts *now*. To kick things off, I decided to make Lara Jean’s Snickerdoodle cookies from the book version of To All the Boys I’ve Loved before – the original inspo for my blog! Lara Jean bakes these cookies for her younger sister Kitty after they get in a fight, and even though she’s mad, Kitty simply can’t resist the warm, soft, cinnamon-sugar goodness of these Snickerdoodles, and after making them I totally understand why.

Lara Jean doesn’t actually provide a recipe for her cookies, so I developed this one on my own. They’re essentially a fluffy shortbread coated in cinnamon-sugar. I find them a bit more fussy than your average cookie, because they require the extra step of rolling the dough in the cinnamon-sugar, but they make for a perfect cozy Sunday afternoon project (I put on a cheesy Netflix Christmas movie while I made them).

Recipe notes: I like to use a bit more cinnamon than other recipes, because it gives the cookies a richer, more colourful look, and shows off the crackles in the dough better. Additionally, if you have time, chill the dough for half an hour in the fridge before rolling out your cookie balls.

Published by Lara B

View all posts by Lara B 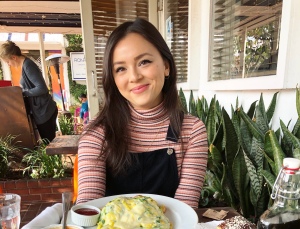 Inspired by Jenny Han’s To All the Boys I’ve Loved Before, I decided to start this blog as an open love letter to the meals, flavours, and new discoveries I’ve made in the kitchen. I can’t wait to share them with you!