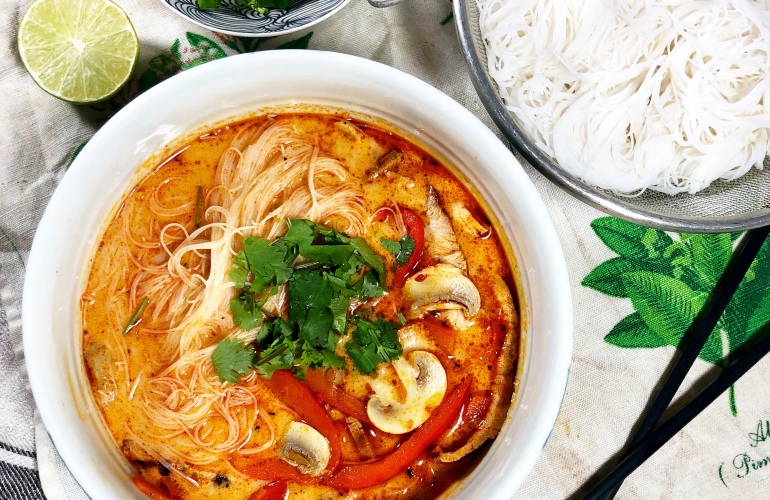 In cold weather, I always crave big bowls of spicy, slurpy soup to warm me up. I love having tom kha gai soup when I go out for Thai food: it’s essentially tom yum soup with coconut milk and the spicy, tangy, creamy flavours hit all the right notes for me. I recently found tom yum paste at my local Asian grocery store, and it inspired me to try making tom kha gai for myself at home. I was shocked at just how easy and delicious it was with the store bought tom yum paste.

I call this recipe “lazy” because it relies on a few shortcuts. For example, the most authentic way to make this soup would be to use the real fresh Thai ingredients to make the tom yum paste (galangal, kefir lime leaves and lemongrass) but since I don’t get to go to the Asian grocery store very often, having all of those ingredients on hand is a pretty rare occurrence for me, and using the paste means I can make it any night of the week when I’m craving it. I also use leftover pre-cooked pork chops so that I don’t have to actually cook any meat, I just add it into the broth. You could also use rotisserie chicken, or even a soft boiled egg on top for protein, or just cook some thinly sliced pork or chicken in the pot in some tom yum paste before adding in the broth in step 1.

Published by Lara B

View all posts by Lara B

Inspired by Jenny Han’s To All the Boys I’ve Loved Before, I decided to start this blog as an open love letter to the meals, flavours, and new discoveries I’ve made in the kitchen. I can’t wait to share them with you!